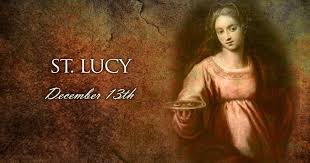 Saint Lucy of Syracuse, Her feast day in the West is December 13, by the unreformed Julian calendar the longest night of the year; she is the patron saint of blindness. She is one of seven women, excluding the Blessed Virgin Mary, commemorated by name in the Canon of the Mass.

Lucy means “light”, with the same Latin root, lux. Ironically, St Lucy’s history is shrouded in darkness: all that is really known for certain is that she was a martyr in Syracuse, Italy during Diocletian’s persecutions of A.D. 304. Her veneration spread to Rome, so that by the 6th century the whole Church recognized her courage in defense of the faith.

Because people wanted to shed light on Lucy’s bravery, legends grew up, reported in the Acta that are associated with her name. All the details are conventional ones also associated with other female martyrs of the early 4th century. Her Roman father died when she was young, leaving her and her mother without a protecting guardian. Her mother, Eutychia, had suffered four years with a “bloody flux” but Lucy having heard the renown of Saint Agatha the patroness of Catania, “and when they were at a Mass, one read a gospel which made mention of a woman which was healed of the bloody flux (dysentery) by touching of the hem of the coat of Jesus Christ,” which, according to Legenda Aurea, convinced her mother to pray together at Saint Agatha’s tomb. They stayed up all night praying, until they fell asleep, exhausted. Saint Agatha appeared in a vision to Lucy and said, “Soon you shall be the glory of Syracuse, as I am of Catania.” At that instant Eutychia was cured.

Eutychia had arranged a marriage for Lucy with a pagan bridegroom, but Lucy urged that the dowry be spent on alms so that she might retain her virginity. Euthychia suggested that the sums would make a good bequest, but Lucy countered, “…whatever you give away at death for the Lord’s sake you give because you cannot take it with you. Give now to the true Savior, while you are healthy, whatever you intended to give away at your death.” News that the patrimony and jewels were being distributed came to the ears of Lucy’s betrothed, who heard from a chattering nurse that Lucy had found a nobler Bridegroom.

Her rejected pagan bridegroom denounced Lucy as a Christian to the magistrate Paschasius, who ordered her to burn a sacrifice to the Emperor’s image. Lucy replied that she had given all that she had: “I offer to him myself, let him do with his offering as it pleaseth him.” Sentenced to be defiled in a brothel, Lucy asserted:

No one’s body is polluted so as to endanger the soul if it has not pleased the mind. If you were to lift my hand to your idol and so make me offer against my will, I would still be guiltless in the sight of the true God, who judges according to the will and knows all things. If now, against my will, you cause me to be polluted, a twofold purity will be gloriously imputed to me. You cannot bend my will to your purpose; whatever you do to my body, that cannot happen to me

The Christian tradition states that when the guards came to take her away they found her so filled with the Holy Spirit that she was stiff and heavy as a mountain; they could not move her even when they hitched her to a team of oxen. Even with a dagger through her throat she prophesied against her persecutor. As final torture, her eyes were gouged out. She was miraculously still able to see without her eyes. In paintings and statues, St. Lucy is frequently shown holding her eyes on a golden plate.

She is the patron saint of eyes

An episode of Lucy’s passion that has been most vivid to her devotés ever since the Middle Ages: having her eyes torn out. It should be noted that another account refers this loss of eyes to before her martyrdom, claiming that in response to a suitor who admired her beautiful eyes, “she cut them out and sent them to him, asking to be left in peace thereafter. Lucy was represented in Gothic art holding a dish with two eyes on it. The legend concludes with God restoring Lucy’s eyes.

Dante also mentions Lucy in The Inferno Canto II as the messenger “of all cruelty the foe” sent to Beatrice Portinari from “The blessed Dame” (Divine Mercy), to rouse Beatrice to send Virgil to Dante’s aid. She has instructed Virgil to guide Dante through Hell and Purgatory. Lucy is only referenced indirectly in Virgil’s discourse within the narrative and doesn’t appear; the reasons for her appearing in this intermediary role are still somewhat unclear to scholars, although doubtless Dante had some allegorical end in mind, perhaps having Lucy as a figure of Illuminating Grace or Mercy or even Justice. Nonetheless Dante obviously regarded Lucy with great reverence, placing her opposite Adam within the Mystic Rose in Canto XXXII of the Paradiso.

In Mark Musa’s translation of Dante’s Purgatorio, a note is made stating that Lucy was admired by an undesirable suitor for her beautiful eyes. To stay chaste she plucked out her own eyes, a great sacrifice for which God gave her a pair of even more beautiful eyes.

Lucy’s name also played a large part in naming Lucy as a patron saint of the blind and those with eye-trouble. She was the patroness of Syracuse.

Saint Lucy, you did not hide your light under a basket,
but let it shine for the whole world, for all the centuries to see.
We may not suffer torture in our lives the way you did,
but we are still called to let the light of our Christianity illumine our daily lives.
Please help us to have the courage to bring our Christianity into our work, our recreation, our relationships, our conversation
— every corner of our day.
Amen

Relying on Your goodness, O God, we humbly ask You, through the intercession of Saint Lucy, Virgin and Martyr, to give perfect vision to our eyes, that they may serve for Your greater honor and glory.

Saint Lucy, hear our prayers and obtain our petitions. Amen.

Prayer to Saint Lucy of Syracuse

Dear Sicilian Virgin and Martyr, whom the Church recalls in Eucharistic Prayer I, you valiantly rejected great promises and resisted several threats in remaining faithful to your beloved Lord.For centuries Christians have invoked you particularly when suffering from eye trouble.

So now we implore your assistance on behalf of {name of sufferer}. We also ask you to teach us to imitate you and to avoid spiritual blindness of any kind.
Amen.

Saint Lucy, your beautiful name signifies light. By the light of faith which God bestowed upon you, increase and preserve this light in my soul so that I may avoid evil, be zealous in the performance of good works, and abhor nothing so much as the blindness and the darkness of evil and of sin.

By your intercession with God, obtain for me perfect vision for my bodily eyes and the grace to use thme for God’s greater honor and glory and the salvation of all men.

Saint Lucy, virgin and martyr, hear my prayers and obtain my petitions.
Amen.

O God, our Creator and redeemer, mercifully hear our prayers that as we venerate Thy servant, Saint Lucy, for the light of faith thou didst bestow upon her, Thou wouldst vouchsafe to increase and to preserve this same light in our souls, that we may be able to avoid evil, to do good and to abhor nothing so much as the Blindness and the darkness of evil and of sin.

Relying on Thy goodness, O God, we humbly ask Thee, by the intersession of Thy servant, Saint Lucy that Thou wouldst give perfect vision to our eyes, that they may serve for Thy greater honor and glory, and for the salvation of our souls in this world, that we may come to the enjoyment of the unfailing light of the Lamb of God in paradise.

Saint Lucy, Virgin and martyr, hear our prayers and obtain our petitions.
Amen.